Advocates and community members gathered to call for affordable housing, emergency shelters and an end to homeless deaths on January 17, 2019. 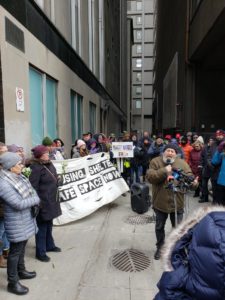 The rally occurred after the deaths of Crystal Papineau and Hang Vo. Both were known in the shelter system and they died (were killed) on nights where the women’s shelters were at capacity. Papineau died in a clothing drop-off box. Vo was killed by a waste truck while lying on a warm grate in an alley near Adelaide and University (on the edge of the financial district).

Speakers at the rally described the shelter and housing system as full of injustice, crisis, chaos and a form of “social murder”.

Dr. Nanky Rai is a primary care physician who works in a community health centre setting and also the shelter system. She called the deaths of two women on city streets in a week “a form of social murder.”

“We, as a society, are actually responsible for these deaths,” said Rai.

“The mayor has to understand that this is chaos, that on a daily basis all the agencies that are trying to deal with this are having a hard, hard time, and more importantly the people living in those places are having a hard time,” said Gaetan Heroux of the Ontario Coalition Against Poverty (OCAP).

Demands of the Rally Participants